The historical development of IMIA

In the middle of the sixties of the last century, the industry started to boom after the war in many industrialized countries and more and more Industrial Groups and Contractors started again to build large industrial plants around the world. They often did so in cooperation with other international contractors. The technological development of power plant engineering – including nuclear plants – led to particularly exposed project risks in the field of engineering insurance.

The results of insurance covers for such risks, especially Construction insurance for industrial plants and operational cover for Machinery insurance became increasingly a problem and engineering insurers, as well as reinsurers, had either to refrain from writing these risks or to incur considerable risk management efforts on an international scale to handle the new types of risks.

The leading Machinery insurers in Germany and other industrialized countries and a worldwide leading reinsurer of such projects joined members of the engineering insurance committee of the German Insurance Association and decided to start an international approach to solve the performance problems encountered.

Some leading members of the engineering committee in the German insurance association wrote to other associations and companies writing engineering insurance business in industrialized countries, suggesting a discussion on a worldwide exchange of experience and joint endeavours for addressing the issues faced by the industry.

The response was encouraging: 11 countries i.e. Austria, Belgium, France, Great Britain, Italy, Japan, Norway, Sweden, Switzerland, U.S.S.R., and Germany came together for a first meeting in October 1968, with the USA and Denmark joining later. The participants of the first meeting in Munich on 3rd October 1968 unanimously agreed that the aims aspired to could best be reached by way of an international association.

It was decided to set up an association under the designation of “International Machinery Insurers’ Association” briefly called “IMIA”. The association aimed at fostering closer cooperation and the exchange of experience with a view to achieving sound risk assessment and successful loss prevention. Dr. Heinz Braun of Allianz in Munich and Geoffrey F. Bullock of The National Vulcan Engineering Insurance Group in Manchester were elected the first Chairman and Vice-Chairman of the association respectively. 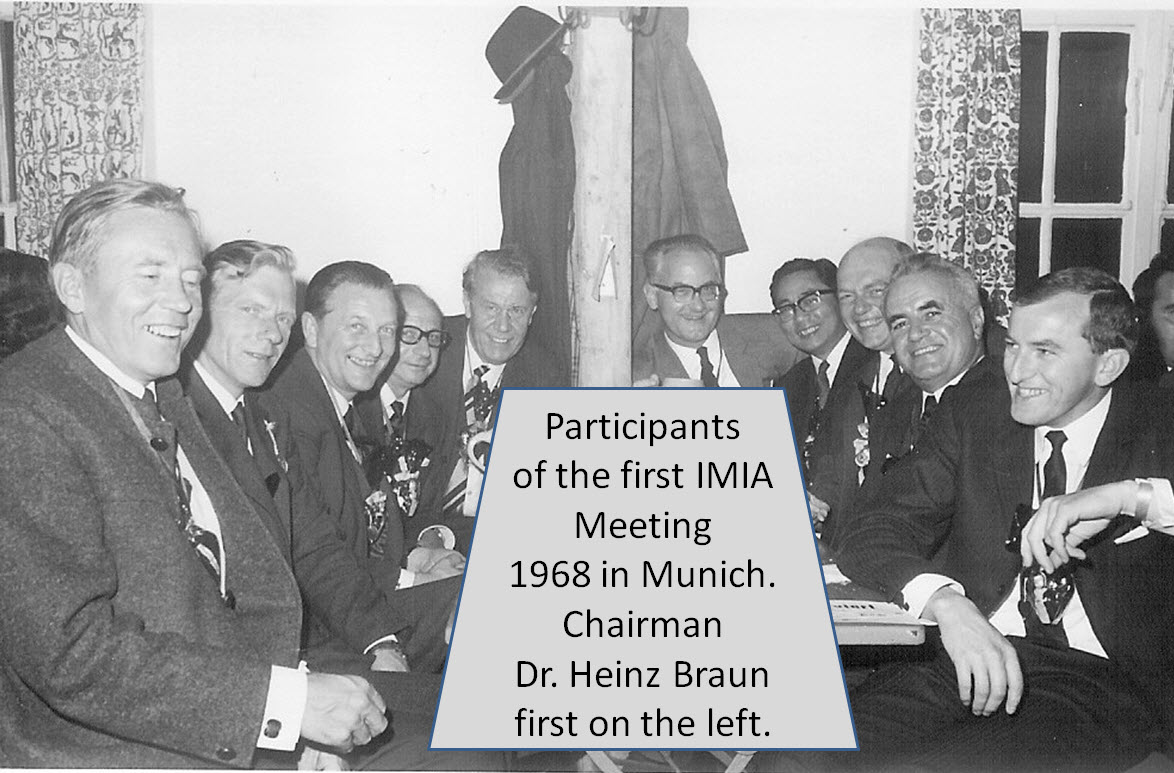 From the beginning, the exchange of experience was extremely open. All members agreed to exchange their underwriting experience and to build up an international loss occurrence record. Each member country produced an annual report, which contained the most important information on the development of engineering insurance lines in their respective markets. Reinsurers added information on other non-member countries.

From the outset, the exchange of information about major claims turned out to be of particular interest to the delegates. The records showed the influence of such claims on the overall underwriting results and were the basis for introducing technical working groups.

The statistics related to these major claims gave relevant information about claims incurred in different groups of machinery and equipment following a variety of causes of loss or damage. Risk exposures of engineering risks were studied by Technical Working Groups. Delegates of different IMIA member countries contributed to the papers with their experience, conclusions and recommendations which were then discussed during IMIAs annual conferences.

Documents were produced by IMIA giving detailed information about the investigations performed by the working groups. Through the insurance associations of the member countries of IMIA, information was transmitted to their respective insurance markets. Underwriters, as well as Managers and loss adjusters, were pleased to have this information and IMIA has become a permanent source of know-how.

In 1968 the annual premium income of IMIA member countries in engineering insurance amounted to 300 million US$. Ten years later, this had risen to 1,375 million US$ whereas now in 2006, the premium income reflected in the statistics page of the IMIA web site shows some US$ 7,600 million. These figures reflect the extraordinary development of engineering insurance lines as the consequence of rapidly growing investments in technology and infrastructure projects.

When the internet became more accessible, IMIA decided to develop its own website to make its papers and knowledge more accessible at a mouse click. With the development of the IMIA web site, which became operational early in 1998, IMIA has become a worldwide knowledge hub for Engineering Insurance.

Since the 50th conference in Munich 2017, the Website includes an Archive accessible for Members in Members’ Login Area with all historical documents and pictures.